Not wanting to leave anyone out in club honours at York this weekend, there was an unofficial wrestling tournament at Spring Exchange that has just been won by School of the Sword student, Chris.

We’ve been sent this picture of him with his glamorous Easter Egg. We’re told he had to fight off more opponents than any of the other medal winners for that prize.

By all accounts it sounds like everyone is having a great time in York at a very enjoyable event. 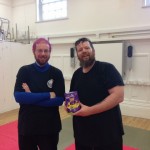